You may be forgiven if you turned off your radio or closed your web browser when you heard or read about the curfuffle raised by two of Alberta’s opposition parties over the amount of questions in Question Period, but if you had taken a second look, you would have seen something edging on the bizarre. This morning, Wildrose MLA Paul Hinman and NDP MLA Brian Mason held a joint media conference (and in an even more bizarre twist, Liberal MLA Laurie Blakeman would later join them).

Although the three MLAs raised some legitimate questions about their situation, I believe that there is a larger and much more important question: Does Question Period really matter?

Anyone who has watched Question Period in Alberta’s Legislative Assembly can easily observe that most Government MLAs use their allotted time to read positive pre-written questions to Ministers, who then respond with pre-written softball answers. From another angle, some Government MLAs have been known to act as a faux-opposition, asking questions crafted to dilute the questions asked by actual Opposition MLAs.

Across the aisle, Opposition MLAs use much of their time to launch loaded questions crafted to illicit embarrassing responses from Government Ministers. Question Period is the bread and butter of Opposition MLAs. It is where they get the chance to score political points fit for the 6pm news. Some MLAs, including Mr. Mason and Liberal MLA Dave Taylor, have become particularly effective at crafting made for television moments in Question Period. 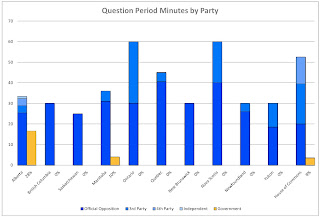 In a better world, Question Period would matter, but the issue raised by the Opposition MLAs today points to the larger problems facing our traditional governing structures and the increasing disconnect between citizens and their democratic institutions.

You're starting to sound like Graham Thomson or Don Braid. Of course Question Perior matters.

It would matter even if nobody ever watched or covered it. It's unfortunate so few do, but it still matters. It's your hated hyper-partisanship at work.

It mattered when it was used by Rachel Notley to show the world how dumb Janis Tarchuk is.

It mattered when the opposition used it to expose the flaws in Bill 44. Sure they also used the press and bill debate, but some of the best exchanges were in QP.

It mattered on the federal level when Harper used it to ridicule the Liberals over the sponsorship scandal.

It is the best opportunity for the opposition parties to grill the government and get exposure for important issues.

Granted, in Alberta, it is used by Tories back benchers to put us all to sleep with softball questions.

And granted, the opposition, in particular David Swann and the Liberals, are often terrible at asking effective questions.

But those points are just more arguments in favor of making QP better.

And what Kowalski and Hancock are doing just make it worse.

I can agree with you on how crazy QP can get – but having more questions from opposition would be better than having the soft-ball questions from the backbenchers. Think about what WOULDN'T be brought into the public light if question period didn't exist *ahem* Tarchuk.

Despite it's benefits, it's unfortunate that QP has fallen from intelligent debate and turned into a "Get the 10-second clip for the 6 PM news" show-down.

It frustrates me too.

I think you have a point, Dave. I consider myself to pay close attention to what the government is doing on a day-to-day basis. I have never watched a full question period and don't feel that I'd get much out of it by starting.

Should QP matter? Do I wish that real conversations happened there so that I felt it is worth my time? Of course. But I just don't think that's the reality right now.

I think if you're too close to it you can't see that, though.

The media only focuses in on one or two sound bytes from QP anyways, so whether the opposition has 7 or 18 questions is largely irrelevant.

The concept of QP is good, but I really don't see a huge difference between giving the opposition parties, say, 20 questions one day each week, or 17 a day, or 7 a day, or whatever you decide.

Nah, it's theatre WITH an audience. And the audience are journalists.