It has been a while since I’ve written about this topic, so I was delighted to see that the Munk Centre for International Studies has released a new report on the science of the Carbon Capture Scheme. The 63-page report was written by Edmonton Journal columnist Graham Thomson while he was on a Canadian Journalism Foundation fellowship at the University of Toronto in 2008-2009.

The anonymous Tiny Perfect Blog gained a lot of attention because of its Perez Hilton-style political gossip and malicious hit and run partisan attacks, but it shut down just as quickly as it appeared. While none of the people I speak to know for certain who the author of this blog was (though they have their suspicions), my former MLA, Rachel Notley knows. But she’s not telling.

I was also quoted in Thomson’s column, stating the position I’ve held since I stopped blogging anonymously over two years ago:

Cournoyer says even though there is a tradition of anonymous political writers going back hundreds of years, bloggers today aren’t in danger of getting their heads chopped off by an angry king. “We’re not living in China or Iran,” he says. “We don’t have to fear repercussions. The police aren’t going to come busting down their door if you’re actually contributing to political dialogue.”

Graham Thomson had some pretty interesting columns this past Wednesday and Thursday as he interviewed Premier Ed Stelmach and Alberta Liberal Leader Kevin Taft for the year-end editions of the Edmonton Journal.

One Christmas present I’ll give politicians in their year-enders this week is a chance to make their argument without being edited down to a 10-word quote. Here, for example, is Stelmach on the issue of climate change and Alberta’s intent to store carbon dioxide emissions underground:

“There’s a fair amount of research now — there’s no sense capturing it in a way that it’s going to escape. So what is the appropriate geography, or geology, to capture it? So how deep do we have to go? Is it in shallow gas wells or deep gas? Deep oil? Will it make sense to capture that CO2, let’s say, in the Redwater field, or do we have to pipe it to Medicine Hat? These are all questions, research that’s being done today. Once those decisions are made, then the next step is to build infrastructure, because you have to pipe it to those locations. And the efficiency gains, for instance, in the Redwater fields, if you’re sequestering and pressurizing the existing oil and wells, you will then draw much more production out of those wells. So there’s rather than creating a new footprint someplace in the province of Alberta, drilling a new gas well, we would of course bring about much better efficiency. Because they say, about 60 per cent of the gas is still in the old wells.” 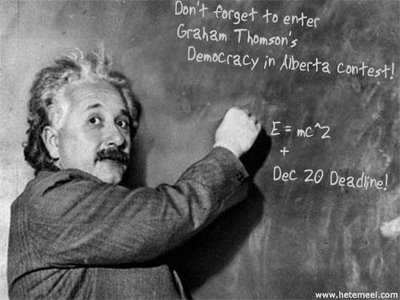 (props to Samantha B. for the Einstein pic maker)

If you’ve been reading my columns in The Journal, you’ll know that I am running a contest.

1st Prize: A rare golden lapel pin commemorating the 100th Anniversary of the Alberta Legislature. You can’t buy this anywhere and is the same official pin worn by the MLAs.
2nd Prize: Hardcover picture book: “100 Years at the Legislative Assembly of Alberta: A Centennial Celebration.”

Rules: Write a brief essay of 100 words or less on the topic: “How Can We Improve Democracy In Alberta.”
You can write in prose or in poetry. In my column I said there’d be extra points if you can do it as a limerick — but that does NOT mean you must do it as a limerick. Everyone who has entered so far has written a poem. I wouldn’t mind some prose.
Deadline is Wednesday, December 20.
E-mail me here or my other address: gthomson@thejournal.canwest.com

So far, I’ve spoken to 2-3 political types who are already working on their entry… in prose or in poetry… I’m working on mine…