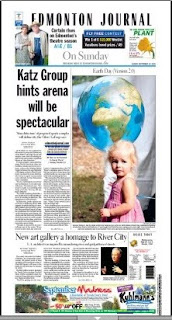 Continuing from yesterday’s post, here’s some more coverage from the blogosphere and MSM on the proposed downtown Edmonton arena.

AGRDT: The good and the bad: Edmonton’s proposed new arena

Colby Cosh: If you build it, they will come. Or at least Mayor Mandel will, And another thing!