An NDP letter writing campaign to change the name of a northern riding to Notley-Central Peace, at least two messages sent from a Blackberry, and a hand-written congratulatory note from Minister Iris Evans are among the many Spring 2010 submissions to the Electoral Boundaries Commission. The Commission recently published its interim report and maps, and is set to hold its second round of public hearings on April 12 to 30, 2010.

For readers interested in the political implications of the changes, thank reader Alan Hall, who emailed me these Calgary and Edmonton maps and poll-by-poll results from the 2008 election (data provided by Elections Alberta). It would be interesting to see these poll results transposed on the interim boundaries and the final report boundaries (due in July 2010). 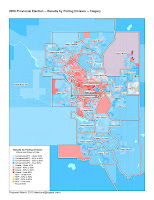 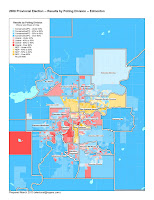 Here in Lethbridge, the boundaries in Leth-East were changed to benefit the PCs. The Libs, of course, won Leth-East, but the riding now includes parts of the wealthier new developments that were once included in Leth-West, which Weadick took in the last election, So, the polls that the PCs won are now part of Leth-East. stripping away support for Bridget Pastoor for Greg Weadick. Gerrymandering at its worst. Things gotta change.

Then maybe the incompetents that David Swann appointed to the committee should both issue dissenting opinions there Kevin.

If either one of them agrees with these boundaries, the Liberals can't very well complain.

The maps are interesting, but they kind of put the lie to the idea that the way people vote is independent of their riding. Look at the boundaries between Edmonton Strathcona and everything else. Between Gold Bar, Highlands-Norwood, Beverly-Clareview and Sherwood Park. It's like a sea of blue against a shore of red and orange, and somehow the shore line matches the constituency boundaries perfectly.

Which means either a) the new boundaries are necessarily going to be worse, as they will move away from something that reflects a true difference in community interest, or b) people are voting on the basis of who in their riding can win, and overlapping the new boundaries would tell you nothing useful.

I tend to believe b).

Look at the boundaries between Edmonton Strathcona and everything else.

Well…yes and no. Yes, there's a huge line between the orange of E-S and the blue of Edmonton-Mill Creek, for example. But there's also a lot more diversity in the upper left hand quadrant of Edmonton-Mill Creek than there is in the rest of it. Which is, interestingly, part of the federal electoral district of Edmonton-Strathcona–not irrelevant, I think, even when it comes to provincial elections.

[…] Commission transposed with the poll-by-poll results from the 2008 election (in March, Alan created maps for the interim report). Read my previous post for more information and commentary on the Final Report. Edmonton: The […]