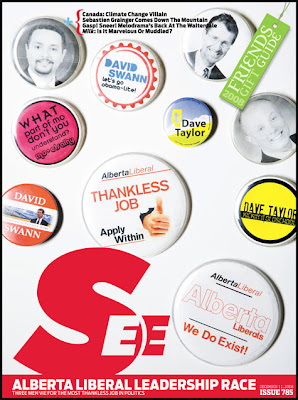 In preparation for this weekend’s incredibly low-key Alberta Liberal leadership announcement, SEE Magazine covers the contest in this week’s issue – including an article from yours truly.

As well-intentioned as Mo Elsalhy, David Swann, and Dave Taylor may be, I believe the low amount of interest in this race says as much about the state of political engagement in Alberta as it does about state of any one party. With voter-turnout having dropped in the 40% range in the last election, it is clear that none of our current politicians or political parties are successfully connecting with Albertans on a meaningful level.

With the three leadership candidates only able to attract 6,000 Albertans to participate by taking out Liberal memberships, it is yet to be seen whether any of these men can successfully transform Alberta’s official opposition Liberals into a competitive alternative to the long-governing Progressive Conservative establishment.