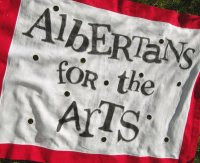 Just got back from tonight’s Rally for the Arts in Churchill Square.

Hosted by Ken Chapman and featuring speakers Margaret Atwood, Maria Dunn, Alice Major, and other local artists, the rally attracted around around 300 Albertans who support the arts and oppose recent comments made by Stephen Harper. The rally also attracted an array of local elected officials and candidates including City Councillors Ben Henderson and Ron Hayter, former Councillor Michael Phair, MLA Laurie Blakeman, Edmonton-Centre candidate Jim Wachowich, and though I didn’t spot her, there were a pack of Linda Duncan volunteers handing out pamphlets.

If you want to get involved and spread the message about the importance of Alberta’s creative economy, join the Facebook group — Albertans for the Arts.