Question: Who in the 21st Century would even think of stripping a basic democratic right such as voting from any Canadian citizen?

Answer: Apparently, the Conservative Party of Canada does. 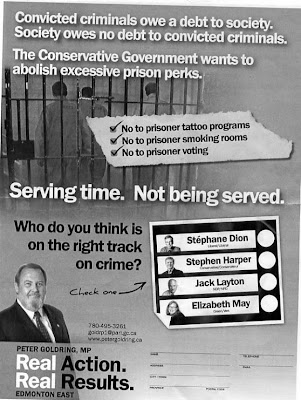 Following yesterday’s the post on taxpayer-funded partisan advertising, a reader sent me this mail-out from Edmonton-East Conservative Peter Goldring (who will unfortunately not be replaced by David Emerson…).

While Canada’s justice system falls short in many areas, I’m sure that there are much more effective ways to reform our criminal justice system than removing this so-called “prison perk.“