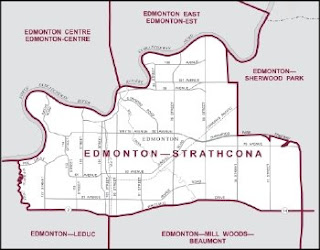 The University of Alberta Students’ Union-hosted Edmonton-Strathcona all-candidates forum 7:00 pm tonight at the Myer Horowitz Theatre is sure to be a good show.

Though there’s been a sizable amount of media coverage about NDP candidate Linda Duncan‘s chances of knocking-off Conservative MP Rahim Jaffer, I think Duncan’s chances rest more on Jack Layton‘s performance in Thursday night’s leaders’ debate than any of the local candidates debates.

As a frustrated and undecided Edmonton-Strathcona voter who can’t stomach the overly negative Conservative and confusing Liberal campaigns, I’ve narrowed my options down to three ballot box choices on October 14:

a) Voting for Linda Duncan: There is no doubt that in 2008 Duncan is the only candidate with a shot at defeating Jaffer. Though it remains debatable how good her chances actually are.

b) Voting for Green candidate Jane Thrall: Nothing in this campaign has made me feel like any of the three main political parties have earned my vote, so the idea of supporting a non-traditional party is very appealing.

c) Spoiling my ballot: There’s a strong possibility that Barack Obama could get my write-in vote.