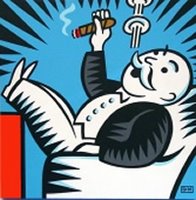 I have a pretty good idea what would happen to me if I spent $29,000 in on a personal trip to Las Vegas on my work credit card…

Alberta’s Finance Department has confirmed an aide to a former MLA has paid back $29,000 in personal expenses he charged to a government credit card, including a Las Vegas hotel bill and luggage.

Sasha Angus worked at the legislature for 3½ years as an executive assistant to former MLA and economic development minister Mark Norris.

According to a 2004 memo leaked to CBC News, when Angus left government he owed $29,000 in personal expenses he had charged to his government credit card. The memo was addressed to then Finance Minister Shirley McClellan.

And it gets even more scandalously mysterious…

CBC News has asked to see the credit card records and correspondence related to the case, but the province refused.

Alberta’s Privacy Commission investigated the government’s refusal and has sided with CBC News.

“All of the records should be released in the … public interest of promoting government being open and transparent in its dealing with tax dollars,” said Privacy Commission spokesman Wayne Wood.

However, the Alberta government continues to block the release and has appealed the commission’s stand.

The office of Alberta’s auditor general also wants to see the records and wants to know why it wasn’t informed about the problem.

And from the Chair of Alberta’s Public Accounts Committee…

“This is an ideal opportunity for Mr Stelmach to keep his promise of transparency and release all government expenses,” said [Edmonton Gold Bar Liberal MLA] Hugh MacDonald, who is chair of the Public Accounts Committee. “The fact that the government refused to release the aide’s expense records to CBC throws their claim of openness and transparency right out the window.”

“It’s obvious this government is not learning from their mistakes – this is yet another example of lavish Tory spending,” added MacDonald. “What kind of control have we got on our spending? None!”

Other than this being a ridiculously outragous and irresponsible use of a public credit card, it got nearly no media attention. Had an Executive Assistant to a Minister in Ottawa benn caught spending $29,000 in Las Vegas, you can bet it would be all over the Alberta media…