Advanced Education Minister Doug Horner has said that he will accept and review requests from Alberta’s Post-Secondary Institutions to increase their base tuition rates beyond what is currently allowed under Alberta’s tuition policy. Whatever your thoughts on the cost of tuition – whether you believe in the strength of communities or individual investment (or a mixture of the two) – it is important to understand some of the context in which this posturing is occurring. This is not simply a result of tough economic times, the Government and Institutions have both attempted to and successfully tinkered with the tuition policy a number of times in recent years.

During very prosperous economic times in March 2006, the Presidents of the University of Alberta, Calgary, Lethbridge, and Athabasca sent a letter to Minister Dave Hancock proposing that tuition increases be based on Consumer Price Index (CPI) inflation plus 3.5 per cent.

In the letter, the presidents warn Alberta is falling behind. “Alberta lags behind the national average in post-secondary spaces, a serious problem as we seek to provide the workforce needed for an expanding economy.”

Students are also frustrated the presidents drafted a proposal without consulting them, saying they were under the impression a joint bid would be submitted to Hancock.

“We were all going to put forward one letter, with one profound and powerful voice,” said West who sits on the steering committee with the presidents and other stakeholders. “We feel really hurt by this and wonder if they were playing us all along.”

The day following my election as Chair of the Council of Alberta University Students in May 2006, I sat in front of the cameras with Liberal MLA Dave Taylor, NDP MLA Raj Pannu, Bill Moore-Kilgannon from Public Interest Alberta, and Jon Hoffman from ACTISEC to oppose the passage of Bill 40: Post-Secondary Learning Amendment Act. 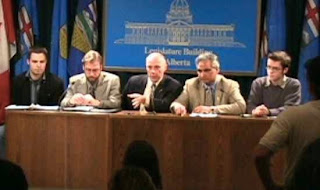 Introduced during the (thankfully) short-lived tenure of Minister Denis Herard, Bill 40 removed Alberta’s tuition policy from the Post-Secondary Learning Act, thus removing the insurance that Albertans had that any changes to the policy governing the cost of post-secondary education would need to be debated in a public forum.

“We’re prepared to wait until the next time the legislature meets to have a new policy implemented, so that the policy is embedded in an act of the legislature,” said David Cournoyer, chair of the Council of Alberta University Students (CAUS) and University of Alberta Students’ Union Vice President External. “If the tuition policy is not in legislation, it is no good to us.”

Universities and colleges in Alberta are currently limited to increasing tuition by CPI inflation (at a maximum), but because the tuition policy is now under regulation it can be changed in the privacy of a closed door Cabinet meeting. No public debate required.