Congrats to the good folks at Alberta Views Magazine for the recent award nominations!

Calgary – Alberta Views is thrilled to be recognized by the National Magazine Awards Foundation with three 2008 nominations, among them the much-coveted Magazine of the Year Award. Two other magazines are nominated for the award – Spacing, a Toronto-based publication exploring public spaces, and Canadian Business, a weekly business affairs magazine.

Writer Chris Turner, of Geography of Hope renown, is shortlisted in the Best Essay category for his story about nuclear power, The Big Decision (October 2008). Raymond Biesinger is shortlisted for Best Spot Illustration for his artwork accompanying Alberta Views’ popular Numbers page.

“We’re proud to be an Alberta magazine,” said Evan Osenton, Alberta Views’ Associate Editor. “But our 2008 stories show that Alberta’s challenges are Canada’s—the oil sands, nuclear power, post-secondary education, public healthcare, support for the arts. We’re pleased to be able to contribute an Albertan voice to the national conversation.”

Former college educator Jackie Flanagan founded Alberta Views in 1997, initially publishing it in a room above her garage. The magazine has evolved from a quarterly to a monthly, and features the most interesting and original Alberta writers and artists. It is no longer published above a garage. 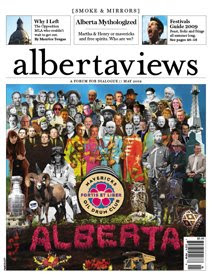 Along with their annual short story contest, Alberta Views Magazine is challenging Albertans to name as many of the people on the cover of their May issue as possible (see low-res to the left). The lucky Albertan who can name the most will win tickets to the summer festival of their choice (I’m betting on tickets to Sled Island 2009).

The May issue will helpfully include the annual the Festivals Guide – a list of all the festivals happening in Alberta – and will hit the newsstands on May 1st. The deadline for entering the contest is May 29th.

*In the event of a tie, the winner will be drawn from the top entrants.

(Props to Beth Ed for the heads up on the contest!)

As you can probably tell from the title of this post, Alberta Views Magazine has launched a blog.

As part of their new endeavour into cyberspace, the good folks at the Alberta Views Blog will be issuing a series of challenges to Albertans every month. I took them up on their first challenge and this is what resulted…

For those of you not familiar with Alberta Views, it’s a great Alberta-based magazine focusing on the “unique political, social and cultural life of Alberta from a progressive perspective.” And they do a pretty good job at it.