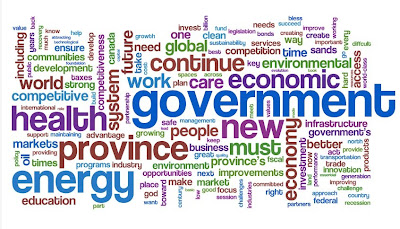 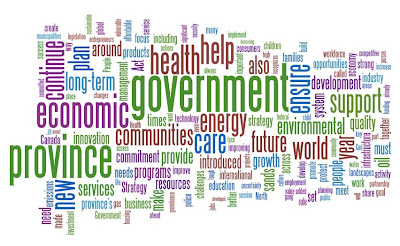 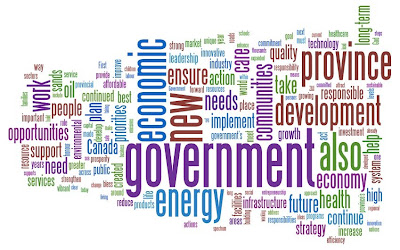 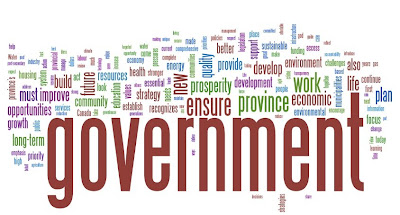 Come on, Dave. Do some analysis. You're more than capable of it. Pretty pictures is CNN "journalism".

Good visuals, Dave. Note the big difference in the word "Government" between 2007 and 2010.

So did Hudema get Danielle Smith's number or what?

That's pretty much what I thought. Not much difference. That either means nothing much has changed over the past couple of years or, as you suggest, throne speeches don't mean much ("rainbows and unicorns").

Thanks for taking the time to do this Dave. Much appreciated.

People are going to start calling you "Chart-Boy" pretty soon.

Wow, you ARE progressive! You're progressing nicely from presumption to utter and complete irrelevance.

teesix have you read my blog? I think I'm safely "chart-boy" 🙂

Dave, I think word clouds are an effective tool to quickly visualize large amounts of text. The similarities really stand out.

Pointless. How do you visually tell the difference when you didn't even use the same font for 2007 and 2010?

I had to use two word-clouds in school. One was called the dictionary, and the other, a thesaurus. Check them out sometime!

I have now become enamoured with word clouds. I found one that may secretly hold the answer to life, the universe and everything. You won't see 42 in it anywhere.

I suggest you do a word-cloud from the twitter posts on the airport closure debate. Then do a couple of word-clouds from Das Capital and the Communist Manifesto. Love to see the results!

Mack: what context do you get from a word cloud? None.

[…] delivered yesterday at Alberta’s Legislative Assembly. Compare this to word clouds from Throne Speeches delivered between 2007 and 2010. Tweet This […]