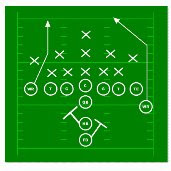 Alberta’s 2009 Provincial Budget will be unveiled at 3pm today, but before you sit down to attentively soak up Finance & Enterprise Minister Iris Evans‘ every word, here’s a short pre-budget playbook:

– Expected surpluses: June 2008: $12 billion; August 2008: $8.5 billion; April 2009: -$1.4 billion.
– How have Alberta’s financial and economic prospects been, according to Premier Ed Stelmach? Good, really bad, not as bad as I told you 24 hours ago, rosy, depending on which month of the year it is.
– Former PC Finance Minister Jim Dinning suggested that “the province should create an independent watchdog panel entrusted to track the government’s financial books and guard against a structural deficit.” Doesn’t this sound suspiciously like someone else’s job?
– A report from the University of Calgary School of Public Policy (pdf) warns that the province could return to a 1980s Getty-style fiscal situation. According to the Calgary Herald, Premier Stelmach reportedly dismissed the report (which was written by two Government Finance and Economics experts) as “nonsense.“
– Both the Liberal and NDP Opposition are tackling the budget from an outreach angle. The NDP launched a roundtable consultation months ago, and the Liberals recently launched a website where Albertans can suggest questions for the Official Opposition to ask during budget debates. It would be nice to hear some constructive criticism from the opposition on the budget, but prepare for some railing.
– On April 2, 2009, the Capital Region Board (comprising the municipalities in the Edmonton region) unveiled the Capital Region Growth Plan: Growing Forward. With this report, municipal leaders have taken an important step in guiding the future development of the Capital Region, but like any major development plan, it will need to be backed up with funding to become a reality.
– Iris’ shoe collection. Alberta’s Best Dressed Woman MLA will be shelving her expensive designer shoes (from last year’s budget) in favour of something more modest.
UPDATE: Twitter is #FAILWHALE today, but if it gets fixed, you can follow #ableg for live tweets.
I will be in the Public Gallery for the Budget Speech, and after I make my way through the post-budget scrums, I will report back.