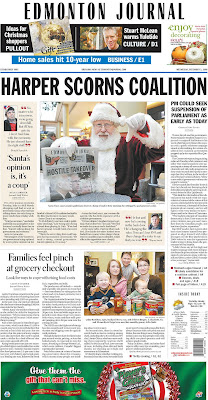 There have been some predictions that the Liberal-NDP coalition supported by the Bloc Quebecois may spurn a resurgent Western separatism movement, but before we start posting Alberta Sheriffs at the Saskatchewan border, I suggest we take a step back and look at the bigger picture.

If you’re an Albertan suffering from Ottawa-alienation, you are probably not as alone as you think — because it’s hard to argue that Canadians living from coast to coast aren’t feeling the exact same way — something deeply reflected in the dropping voter turnout and political engagement levels across the country.

I’m not sure I’ve ever felt particularly represented by any of the parties in Ottawa, but I don’t feel this is because I was born and raised in Alberta. The insulated political bubble in which Ottawa’s political culture exists draws in politicians from across regional and party-lines, and it will only change when Canadians from across the country begin to take their responsibilities as citizens seriously. More Canadians need to become active citizens and demand more than political maneuvers and spin from their elected representatives, whether they be Conservative, Liberal, NDP, or BQ.

I support progressive politics in Canada, but truth be told, I have about as much trust in Stephane Dion and Jack Layton as I do in Stephen Harper, and that’s not much. As I previously wrote, I hope that the long-term silver lining of this situation will help end of the extreme partisanship and negative politics brought to Ottawa by Harper and Tom Flanagan. By playing politics too fast and too loose, Harper’s Conservatives killed any real chance of forming positive working relationships with the three other parties. By the time the Conservatives backtracked on the more unpopular moves, it had become unreasonable to believe that the other parties in the House of Commons could still work with a political party that publicly held their eradication at the core of its political, and apparently legislative, agenda.

Finally, I thought that Chris Labossiere at A Rich Full Life presented some pretty thoughtful points about his frustrations with Canadian parliamentary culture (and I agree):

“I don’t know enough about a Parliamentary Democracy to debate the nuances, but what I do know is that it punishes moderate, progressive thinking. We buy the nonsense that we must vote along party lines. Firstly at our riding level, but our whole system actually chastises MP’s & MLA’s who deviate from the party line. The whole system is set to punish those who may want to walk their own talk. Unlike the American system, where a party faithful can object to the party line for their constituents, we never let that happen. How can the shining stars ever rise out of the mix to make a name for themselves if they have to pretend to believe that everything their party believes in is gospel. The moderates are lost in the fray. The visionaries threaten the status-quo and for that they must be punished. Most great ones simply don’t bother, and continue to be great in their industry, profession or calling.“