A couple of minutes ago, it appears that an online prankster had a little bit of fun with U.S. Senator Hillary Clinton‘s twitter account. Though the pranksters mark was quickly removed only seconds ago, I was still able get a screen shot of the prank while it was still up. 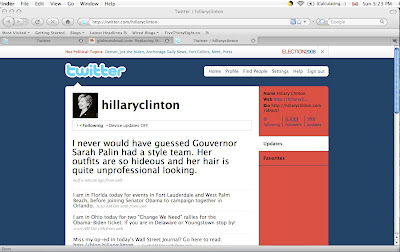 As a friend said of an earlier prank involving Jack Layton‘s twitter account, it’s “another great moment from the intersection of Eager and Careless.“