Some initial thoughts on the results of the 2008 federal election… 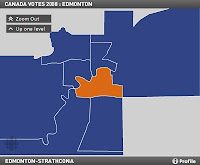 Edmonton-Strathcona: Linda Duncan‘s 442 vote win is a boost for progressive Albertans who were demoralized in the March 2008 provincial election. Duncan’s team ran a strong campaign while focusing their message on the importance of voting strategically to defeat the Conservative incumbent, and it’s clear that their message resonated with a large group of voters in this riding. Defeated Tory MP Rahim Jaffer isn’t giving up and is hoping a recount will crown him as “Landslide Rahim” (his words). If he is interested in becoming MP again, my advice to Jaffer would be to put the lawyers away, be a good sport and congratulate Duncan on her victory, because your campaign for the next election starts today. Losing sucks, but no one ever said politics was fair.

Edmonton-Centre: I expected this to be a closer race, but in the end Jim Wachowich received just more than half the votes of Conservative incumbent Laurie Hawn. Though this result probably says a lot more about the weak Liberal campaign in Alberta, it’s fair to recognize how hard Hawn had campaigned in this election. After fighting two tight campaigns against former Liberal MP Anne McLellan, Hawn proved that you can win by focusing on the doors in Edmonton-Centre. Congrats to Laurie Hawn and his team.

Edmonton-Sherwood Park: Independent Conservative James Ford‘s near upset of Tory Tim Uppal was a bit of a surprise. I predicted that Ford would do well, but I didn’t expect him to nearly defeat Uppal. Expect Uppal to be doing a lot of fence mending with conservative voters in this riding before the next election.

ABC: Premier Danny Williams wins this round as the Conservatives lose their 3 Newfoundland seats to the Liberals (Scott Andrews and Siobhan Coady) and NDP (Jack Harris).

“Wins” for Stephen Harper, Gilles Duceppe, and Jack Layton: They boosted their party’s popular votes and seat totals. Stephen Harper was able to increase his party’s minority hold on the House of Commons, but the inability of his party to gain a majority could cause him trouble in the future. Rising from his political grave in force, Gilles Duceppe‘s Bloc Quebecois pushed back the expected Conservative sweep in that province. Jack Layton‘s NDP may not have surpassed the Liberals to become the Official Opposition, but they increased their party’s seat total by 7 seats from the last election, including new seats in Quebec and Newfoundland (NDP buzz words I will not miss: kitchen table, ordinary Canadians, working families).

“Loses” for Stephane Dion and Elizabeth May: After losing both seats and votes in this election, it’s time for Stephane Dion to put up a vacancy sign in front of Stornoway. He is an intelligent man, but has failed to prove that he has the leadership qualities to lead his party to form government. Time for the Liberals to look to new blood (Michael Ignatieff or Gerard Kennedy, perhaps…). The Liberals also now have more seats in Nova Scotia than they do in the Prairie provinces. The Greens increased their popular vote to nearly 7% nationally, but Elizabeth May was unfortunately unable to defeat Peter Mackay in Central Nova. Interestingly, Green candidate Dick Hibma placed a strong second with 27% in Bruce-Grey-Owen Sound.

Leaders Overall: Canadians lose. It is apparently too much to ask that Canada have a political leader who will inspire Canadians to be better citizens, rather than just pander for their votes.

Taking Alberta for granted: I see this as being caused by a two-pronged problem. First, the Conservatives take it for granted that they will win all (or nearly all) of Alberta’s 28 seats, therefor it’s not surprising to see Conservative MPs (like Rona Ambrose and Jason Kenny) spending most of the election campaigning in battlegrounds like Ontario, rather than knocking on doors in their own ridings.

Second, with the exception of two or three ridings, the Liberals and NDP have given up on Alberta. If either of these parties were to look at the successful 50-State Strategy implemented by Democratic Party Chairman Howard Dean, they would appreciate the strategic value of fighting your opponent on all fronts and not conceding ground that may not look fertile in the present election cycle. Though it is unlikely to produce short-term results, spending time and resources in Alberta’s urban ridings could produce positive electoral results for the Liberals and NDP in the long-term — and if anything, it could keep some of those Conservative MPs from spending so much time in Ontario, rather than connecting with voters in their ridings.