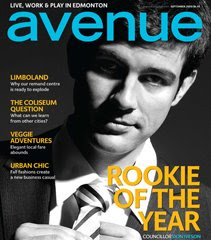 Avenue Magazine has a great piece in this month’s edition on Edmonton City Councillor Don Iveson.

Lisa Gregoire wrote the article after following Iveson around Edmonton in the months following his high profile victory over incumbent Councillor Mike Nickel in the October 2007 municipal election that brought him to City Hall.

Iveson, a strong advocate for public transit and smart growth initiatives, was voted most effective City Councillor in SEE Magazine‘s 2008 Best of Edmonton and has been credited by Edmonton Journal columnist Scott McKeen as being the coolest head on City Council.