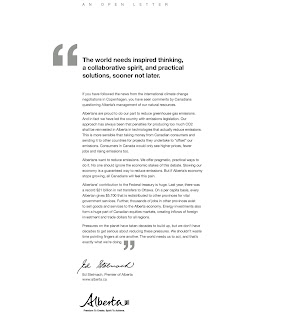 You wouldn’t know it from the near complete lack of media coverage, but a low-key conference hosted by the Canada School of Energy and Environment (CSEE) brought some of Canada’s top government and energy industry officials to Banff this past weekend. The June 4th to 6th meeting focused on the upcoming Copenhagen Conference.

Thanks to a long-time daveberta.ca reader, I was able to get my digital hands on a draft copy of the conference delegate program for ‘The Search for a Canada U.S. Climate Change Accord: the Road to Copenhagen and Beyond.’ The delegate package lists scheduled discussions and working sessions on topics ranging from pricing carbon, modernizing Canada’s electrical grid, harmonizing energy policy with the United States, and developing clean energy technology.

According to the draft program, conference attendees included:

None of Canada’s municipal leaders or members of the media were included in the list of attendees.

By organizing a conference of this size, my source pointed out, CSEE is clearly showing that it has more clout than an average academic unit. While it’s positive to see such collaboration happening between government and energy officials, it would be interesting to discover who provided the impetus and funding to hold a conference like this. While its secretive nature is suspicious, I hope that conferences like this one will lead to more action than rhetoric when our representatives travel to Copenhagen in December 2009.