Here are some thoughts on Ed Stelmach’s recently announced cabinet, which looks more like a cabinet shuffle, as it includes most of the pre-election cabinet. I can imagine that choosing a cabinet is probably one of the more difficult decisions that a Premier has to make during his (and maybe someday: her) time in office, but that won’t stop me from offering some thoughts…

– Ed Stelmach gets points for bringing some diversity and colour to cabinet for a change.

– It must suck to be Edmonton-Castle Downs Tory MLA Thomas Lukaszuk, who was passed over for a real cabinet spot by rookie Edmonton-Glenora MLA Heather Klimchuk.

– With Sherwood Park Tory Iris Evans as the new Minister of Finance and Enterprise, I wonder if Strathcona County will be getting that veto she was talking about…

– Speaking of regional cooperation… Edmonton kept quiet and played nice over the last year, while Calgarians through a fit, and now Edmonton ends up with half the number of full cabinet spots as Calgary. Perhaps Mayor Mandel might want to try out a new strategy for provincial relations.

– Parliamentary Assistants abound. Other than that it would probably make more sense to call them Legislative Assistants (or Secretaries), this looks like a cabinet structure borrowed from Gordon Campbell’s BC Liberals from when they won their 77 out of 79 seats in 2001 (except, I think they called them “Ministers of State“). The Parliamentary Assistants position is not only a good way for the Tories to train future cabinet ministers, but also a way to keep MLAs busy in the newly supersized caucus. Bringing Janice Sarich and Raj Sherman into these positions was a good move.

– Dave Hancock’s move to Education from Health could be seen as a demotion, but it could also be an opportunity to actually get things accomplished in Education (though I think Hancock would have been a much better choice for Finance). I’ll be keeping an eye on how Hancock moves on the proliferation of P3s in Alberta’s education system.

– Moving Ron Stevens to Intergovernmental Affairs signals is an interesting move by the Tories in their brewing battle against the Federal Tories on the environment file. Interestingly, Stevens’ Calgary-Glenmore constituency is also part of Prime Minister Stephen Harper’s Calgary-Southwest riding.

Check out CalgaryGrit and the Official AGRDT ‘Alberta’s new cabinet’ post for some more commentary on the cabinet shuffle.

Premier Ed Stelmach will reveal today a largely status-quo cabinet that gives Edmonton only two full-fledged ministers and shuffles veteran Dave Hancock out of health and into a lesser portfolio, The Journal has learned.

Though Prime Minister Harper denied that this move was in preparation for a Spring election, it’s a little hard to believe that an election isn’t on the minds of everyone in political Ottawa at the moment. It should be interesting to see how this new cabinet configuration shapes up against Liberal leader Stephane Dion‘s new front bench critics.

Rona Ambrose from Environment Minister to Intergovernmental Affairs.
John Baird: from president of the Treasury Board to Environment Minister.
Rob Nicholson: from House leader to Justice Minister and Attorney General.
Vic Toews: from Justice Minister to president of the Treasury Board.
Monte Solberg: from Immigration to Human Resources and Social Development.
Peter Van Loan: from Intergovernmental Affairs and Sport to Government House Leader and Democratic Reform minister.
Diane Finley: from Human Resources to Citizenship and Immigration. 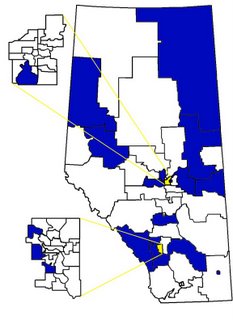 Alberta’s new cabinet has been announced…

Definitely some interesting picks that caught me off guard… thoughts?

Props to the anonymous commentor with the press release link…

Here are the new Ministries announced in Premier-designate Ed Stelmach’s first cabinet. Looks interesting – Housing in at the table with Municipal Affairs. Science & Innovation is back with Advanced Education. Aboriginal Affaris merges with Intergovernmental Affairs. Community Development becomes Tourism, Parks, Recreation, & Culture. It should be interesting to see how the Treasury Board concept works.

So, here are my cabinet predictions. Keep in mind that we are not sure which Ministries will survive a predicted crunch. We now know that we will know the cabinet by this Thursday.

As you can see from above, I don’t think there will be a massive purge of senior Ministers as I would predict that Iris Evans, Ron Stevens, Pearl Calahasen, and Greg Melchin will all keep their jobs as “Steddy Eddie” wants to keep some semblance of stability and experience in his first cabinet while bringing in new faces like Ray Danyluk, Mel Knight, and Lloyd Snelgrove to prominant cabinet posts.

For the apparently valuable “Deputy Premier” position that the media seems to be fixated on as uber important, I would gander a prediction that Premier Stelmach will take the route of Prime Minister Harper and simply disolving the position of “Deputy” (which is only a symbolic title in reality).

(*I changed my prediction about Harvey Cenaiko…)

By Friday December 15, 2006 Albertans should know for sure what the face of the first Ministry of Premier Ed Stelmach‘s Tory government will look like.

As Ed Stelmach is such an unknown political quantity for many Albertans (even many political folks) the MLA’s in his cabinet will define what many Albertans will see as a first impression, it will be very important to see who gets which cabinet portfolio. Here is my predictions on who is in and who is out in the first cabinet of PC Premier Ed Stelmach:

I’m gone to Lethbridge tomorrow, so no blogging until the weekend (most likey).

Until then, let’s play a little game called – NAME THAT CABINET!

In this game, you’re Ed Stelmach… who will you put in your cabinet?