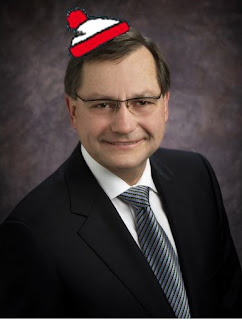 Perhaps he’s on summer vacation, or maybe he has entered a Bill 44 induced vow of silence, but if there is one comment I have consistently heard from my politically interested friends over the summer months, and more recently from other bloggers, it has been: Where is Premier Ed Stelmach?

Over the summer, a number of important issues have emerged that are shaping Alberta, but Premier Stelmach has been absent from the important debates that have been occurring at BBQs and picnics across the province. Among the conversations I’ve been having, here are a couple of issues where people have noticed Stelmach’s absence:

Resisting the calls for her resignation after public controversy from within the Department of Children’s Services and the recent conviction of a director of child services, Premier Stelmach remains silent as Children’s Services Minister Janis Tarchuk remains in her job. In a recent article by Kevin Libin, Keith Brownsey pointed out:

“Where’s the responsibility from the Minister for the actions in her department? That’s the key to the parliamentary system,” Mr. Brownsey says. “At the federal level this Minister would have been gone and in any other province she would be gone. But not here in Alberta.”

Stelmach had no trouble firing an annoying backbencher when he became a slight inconvenience, so why is our Premier MIA when it comes to the integrity of government and the accountability of Cabinet Ministers?

The recent decision to close beds at the Alberta Hospital is meeting fierce opposition from Doctors, who fear that mentally ill patients will simply end up living on the streets of Edmonton. When Edmonton Journal journalist Archie McLean asked an AHS spokesperson about the government’s decision, he was rebuffed and was told that even though taxpayers pay 100% of the AHS budget and that it is administered by a government appointed board, it is a separate entity from the government. As the elected government, led by Premier Stelmach, is essentially responsible for AHS, isn’t every AHS decision a government decision?

The Camrose Canadian, a Sun Media newspaper, recently called out Stelmach for not showing enough public support for Alberta’s Pork Industry, which has taken a hit since the ‘Swine Flu’ hit headlines. This is quite the shocking critique for our first Premier from rural Alberta in 36 years:

Civic, provincial and federal representatives will line up with producers and the general public to get their fill of porcine heaven, but Stelmach has declined his invitation. Perhaps the two dimensional premier should take a page from his predecessor’s playbook, show a little leadership for a change, and saddle up to the grill.

After calling a by-election in Calgary-Glenmore, bloggers and news media have pointed out that Stelmach is nowhere to be seen. Even PC candidate Diane Colley-Urquhart didn’t mentioned Stelmach once in a recent 10 minute interview with CTV Calgary.

Recent polls have shown that Stelmach’s approval ratings among Calgarians sits around a low 34%, twelve points below his 46% disapproval rating among Calgarians. During the 2007 by-election in Calgary-Elbow, PC candidate Brian Heninger reacted to a similarly hostile atmosphere by threatening to choke Stelmach. It is unknown whether Colley-Urquhart will adopt a similar tactic.