Infrastructure Minister Jack Hayden may have convinced the AAMDC to vote down an a resolution opposing Bill 19 at their recent convention, but whatever influence Hayden has over rural Reeves and Mayors (Hayden is the former Director of the AAMDC and Reeve of Stettler County), it’s not stopping a group of rural landowners in central Alberta in their steadfast opposition to Hayden’s Land Assembly Project Area Act.

While Hayden’s power of persuasion over rural politicians may be impressive, it doesn’t mean there is lack of concern over Bill 19 on municipal councils. The Drayton Valley Western Review has reported that Brazeau County Council voted not to oppose Bill 19 because they believed ‘their voice is too small to be effective.‘ As such they have left matters in the hands of the Alberta Association of Municipal Districts and Counties to give voice to the concerns of the residents of Brazeau County. The Western Review continued:

One councillor, Anthony Heinrich, does not feel this is the best course of action. He was disappointed that council would not be voicing the concerns of the ratepayers directly while seeking support from other municipalities and counties in the area, something that has been done in the past.

Heinrich says he is disappointed in the way the MLAs are dealing with this issue. At a meeting in Warburg March 10 with the Warburg Pembina Surface Rights group three MLAs; Evan Berger, Diana McQueen and Ray Prins listened to the concerns of those present. Heinrich says he thought the constituents were being listened to, but, after reading some of the comments made by McQueen in a previous article in The Western Review, felt that perhaps this is untrue.

He says it is possible MLAs are speaking truthfully when they give their word that no Alberta resident will be taken advantage of using this bill. However, he is concerned that these MLAs may not hold the positions that they currently do when an issue arises.

A group of landowners, including Green Party leader Joe Anglin, are continuing to host information sessions and public town hall meetings across central Alberta to raise awareness and opposition to Bill 19. The United Power Transmission Area Groups will be hosting two more town hall meetings in Innisfail and Crossfield on April 6 & 7: 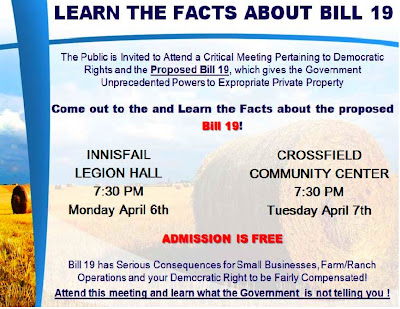