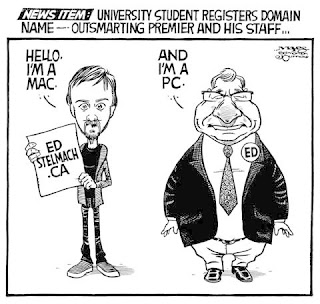 It’s hard to believe that it was actually a year ago today that my petite affair with Alberta Premier Ed Stelmach became public. Though we may have had some rough bumps over the past year, I think we may have discovered how to make our relationship work in this great province we call Alberta.

It’s been a growing year for both the Premier and I. After the PCs won their first majority government under Stelmach, they finally decided to hire someone with more than a basic understanding of the interweb. Next week, the PCs caucus will be launching a new interactive website – mypcmla.ca. If successful, it may have the potential to push Alberta’s political-class into joining the world of web 2.0.

I’m not sure how Stelmach will be celebrating the occasion, but I will celebrate by hopping on a bus to Saskatchewan. I will be speaking at the Canadian University Press annual conference in Saskatoon this weekend. I’m excited to be be delivering a session on politics, new media, and web 2.0 on Friday afternoon, and to be joining blogger Joey Coleman in a panel discussion on blogging on Saturday.

(For those of you interested in some legal followup to the incident, in November 2008 the Alberta Law Review published an article titled ‘EdStelmach.ca and the Tort of Misappropriation of Personality,’ which is quite interesting.)