Many Edmontonians who use Twitter might have noticed that Global Edmonton News anchor Lynda Steele recently deleted her Twitter account @lyndasteele. Ms. Steele was an avid and engaged contributor on Twitter and I assumed that her departure was caused by a loss of interest or time management issues. It turns out that her account may have been shut down because of four ‘tweets’ that were sent between 3:16m and 3:17pm on Tuesday, February 9, 2010 and were related to the provincial budget that was under a media embargo until 3:20pm.

A breach of an embargo of any kind is a breach of trust. That is has to do with subject matter that can have market implications makes it all the more serious a matter. The Government of Alberta’s budget embargo rules for media are extremely permissive relative to those of the federal government and some other provinces. In exchange for this flexibility, government asks only that media agree to respect the rules of the embargo.

Global Edmonton breached that agreement. In light of the fact that this is the second budget embargo breach in three years by an Alberta media outlet, we must now consider more severe restrictions on the entire media corps for future budgets and simmer events, including a strict lockup where electronic devices are removed.

The media outlets that are given access to the budget documents before they are officially released have agreed to the embargo on reporting information. The budget is one of the most important centre pieces of a government’s governing, political, legislative, and communications strategy, so it is no surprise that they would react this way towards Global Edmonton (CBC Calgary found themselves in a similar situation in 2008). Having attended each budget announcement (or the Rotunda scrums afterward) since 2003, it is a big event that government and opposition politicians, business groups, and public interest groups craft many of their main messages around.

The question is: why does this embargo breach need to result in more severe restrictions on the entire media corps? Perhaps our government placing too much importance on the budget embargo, and even the actual budget speech. Do these breaches prove that more restrictions are needed or that perhaps the Public Affairs Bureau and their political master need to examine their role as communicators with less of a focus on ‘command and control’ and more of an open 21st century attitude.

(For more on the role of the Public Affairs Bureau, read this exert from Kevin Taft‘s 1997 book Shredding the Public Interest) 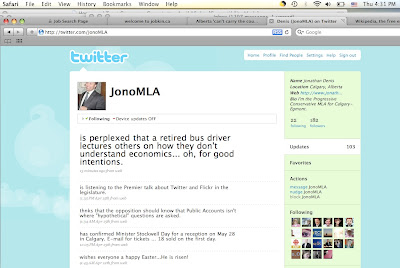 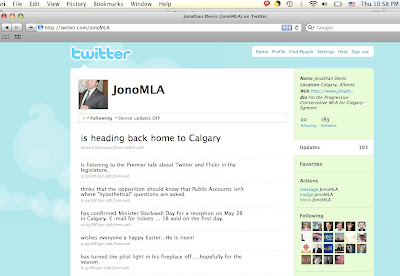 – Obama2Canada.org has been launched to raise awareness of the environmentally damaging effects of the oil sands before President Barack Obama‘s 5 hour Ottawa visit with Prime Minister Stephen Harper on February 19.

– Edmonton’s Twestival hit the front page of the Edmonton Journal this morning.

– In a recent poll, new Federal Liberal leader Michael Ignatieff was viewed more positively than negatively in every province except Alberta across all age and gender groups.

– More evidence of the continued implosion of the CanWest media empire. I was sad to hear that the Calgary Herald will be letting go many of its freelance writers, including political writer Les Brost.

– There’s some interesting ongoing debate on the state of Liberal politics in Alberta in one of my previous posts.