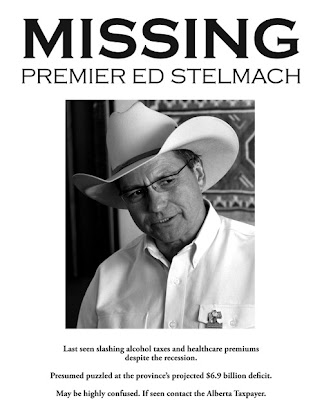 While he made a brief appearance this week to announce Alberta’s projected record $6.9 billion deficit, many Albertans have begun to notice Premier Ed Stelmach‘s absence from the important debates happening in our province.

In the first of many upcoming collaborative productions, Adam Rozenhart and I have created this poster to help Albertans in the hunt to find our missing Premier.

You can download the print-quality PDF here. Please print these off and post them all over your towns and cities!

On August 26, 2008, Finance Minister Iris Evans announced that the Government of Alberta was headed to a $8.5 Billion surplus. “It’s clear that our economic outlook continues to be bright,” Evans was then quoted.

On August 26, 2009, it is expected that the Government of Alberta will announce a $6.9 to $8 billion deficit. That is a $16 billion dollar difference in one year.

Once considered to be the land of endless money and honey, Toronto-style bragging rights included, Albertans have now found their government back in a place that our political leaders swore they would never take us. But as development of our bitumen-glazed energy beach has slowed to a more manageable pace and natural gas prices have dropped, is it fair to criticize a one or five year deficit in a province that has in many ways become a rentier state?

Personally, it is not so much the existence of a deficit that I have a problem with, as much as it is the sloppy political decisions that led us here. This won’t be a surprise to regular readers, but I sincerely believe that mediocre leadership from each end of the political spectrum is holding Alberta back. There are a lot of smart people in Alberta, so it’s not as if there was a lack of warning to the Alberta Government to save while the boom was hot.

I don’t usually like to be the person who says ‘I told you so,’ but in this case I’m going to take a bit of guilty pleasure out of it. For years, many of my PC-supporting friends would tell me again and again that because of the Fiscal Responsibility Act, Alberta was forever protected from future deficits. “Dave, you silly lefty,” they would tell me, “deficits are illegal in Alberta. Period.” I would of course respond with “it’s nothing a quick legislative amendment can’t change,” and we’d quickly go back to drinking our beer. Minister Evans introduced amendments to the Fiscal Responsibility Act in April 2009.

Aside from a significant downturn in resource revenue, our provincial leaders haven’t exactly been diligent in the area of smart planning. The lost revenue from the cancellation of approximately $1 billion dollars in Health Care Premiums and the 5-month long Alcohol Tax, as well as the continued support of the Carbon Capture Scheme (CCS), are the kind of decisions that have and will continue to contribute to the loss of billions of dollars of revenue.

As I wrote in my review of the 2009 Alberta Budget, before politicians and pundits begin talking about slashing spending and cutting services, let’s please keep some perspective on economic growth:

Alberta’s economy has depended on revenue from cyclically priced resource commodities for decades and has seen much worse economic times. After years of unsustainable growth, no one should be surprised that Alberta’s economy has slowed down and now is facing a 1.8% contraction. With +$50 barrels of oil and 2% projected economic growth next year, Alberta is in a much better position than it was during previous economic recession. Let’s please try to keep some historical perspective in mind when we’re talking about these tough economic times.

Graham Thomson has an excellent column about Alberta’s record high deficit in today’s Edmonton Journal that should be recommended reading for those wanting more insight into Alberta’s fiscal situation.

Ed Stelmach (February 23, 2008): “A Progressive Conservative government will never put Alberta back into a deficit position.”

UPDATE: Premier Stelmach has revealed his true motivation behind his decree and the rescinding of the Liquor Tax that his Government imposed in the April 2009 Budget:

(h/t the Chief of Staff to the President of Daveberta)

These tough economic times have presented the Government of Alberta with a tougher fiscal reality from which to draw the 2009 provincial budget than what has become usual. Our new $25-million provincial slogan may be “Freedom to Create. Spirit to Achieve,” but I felt there was little evidence of the new slogan in this status-quo budget. Some funding cuts, some funding increases, no substantial tax-cuts or increases (with the exception of increases in property-tax and alcohol tax…).

Tailor made to avoid attracting sensational headlines, Alberta’s first deficit budget in 15-years included a deficit in creativity and achievement (if you exclude amending the Fiscal Responsibility Act to allow for deficits). While I don’t believe this was an awful budget, it is becoming increasingly apparent that the current government does not have a serious long-term vision to guide Alberta through these tough economic times.

Here are some of my thoughts:

Diversification. In these tough economic times, government resource revenues have dropped from $12 billion in 2008 to $6 billion in this budget. As a province that has decades worth of dependence on collecting resource revenues, it shouldn’t be a shock to anyone that we need to be smarter about how we plan and finance our government spending. Surprisingly, I actually believe that Premier Ed Stelmach and Finance Minister Iris Evans somewhat understand this (which is probably one of the reasons we aren’t seeing across the board massive spending cuts in this budget). The Alberta Ingenuity Fund was a good start, but I would like to see the government focus on and put serious funds behind the development of new Research & Development and Innovation strategies in areas like renewable energy (if you’re looking for ideas, check out the Pickens Plan).

Educate. Educate. Educate. Funding levels remain constant in post-secondary education, including the continuation of the promised 6% annual increase, which will continue to allow annual tuition increase to be indexed to CPI. One of the keys to finding our way out of tough economic times is education. As our unemployment rates rises due to slowing economic growth, one of the smartest moves our political leaders could make is to invest more in education. Since the beginning of the year, there are many un-skilled workers who have been laid off, and by giving them the resources to earn an education, whether it be in a skilled trade or University degree program, the province with be better off with a more skilled and educated workforce.

Carbon Capture & Storage (aka, the Environment). During her speech to the Legislature, Minister Evans compared the Government of Alberta to a family, who, when facing tough economic times, needs to tighten the household budget. If Evans’ metaphor actually applies, I guess it includes a $2 billion fund for trips to the casino. This year, the PC government plans to gamble $100 million on Carbon Capture & Storage (CCS) research, and $800 million over the next two years (and a remaining $1 billion over the next 12 years) on the technologically and economically unproven CCS. In recent statements to the media, both Stelmach and Energy Minister Mel Knight may have admitted that CCS would be more effective in capturing carbon from coal-burning power plants than capturing carbon from the oil sands. Other than promised future funds for CCS research, this budget does very little to address many of the larger environmental issues facing us in these tough economic times.

Public Transit. Will these tough economic times lead more Albertans to park their Dodge 4×4 (with a Hemi) and wait at the corner for the bus? The Green Trip Fund will distribute $10 million this year, and $520 million over the next three years into public transit initiatives. Investing in Alberta’s urban centers, but this a far cry from the originally promised $2 billion fund. Paired with a decrease in the Municipal Sustainability Initiative (from $450 million in 2008 to $100 million in 2009), and it becomes increasingly apparent that serious investment in municipal development is needed to get municipal infrastructure in our cities where it needs to be.

Perspective on Economic Growth. Alberta’s economy has depended on revenue from cyclically priced resource commodities for decades and has seen much worse economic times. After years of unsustainable growth, no one should be surprised that Alberta’s economy has slowed down and now is facing a 1.8% contraction. With +$50 barrels of oil and 2% projected economic growth next year, Alberta is in a much better position than it was during previous economic recession. Let’s please try to keep some historical perspective in mind when we’re talking about these tough economic times.